More than 400 years have passed since the death of Miguel de Cervantes (and that of Shakespeare who died nearly the same day) and his work as a fiction writer lives on mostly though his greatest literary work, Don Quixote.  Much has been made of this masterpiece and Cervantes influence on the Spanish language and literature as a whole is highly considerable.  Cervantes was also an interesting person in his own right, as an assistant to a Catholic Cardinal, a soldier, a prisoner of war, a purchasing agent for the Spanish Armada, and as a tax collector (of which his activities earned him some jail time).  All of this took place long before he became a novelist.

Don Quixote has been recreated as a play and on film any number of times in the four centuries since its original publication as a novel.  My own first experience with the work was as the film adaptation of the 1964 musical Man of La Mancha (1972).  The cast included Peter O'Toole, Sophia Loren, James Coco, and Ian Richardson.  I subsequently read the novel and years later was saddened by the events which prevented a Terry Gilliam adaptation of the novel, events which are detailed in the tragic documentary Lost in La Mancha (2002).  The celebrated artist Gustave Doré did over 300 illustrations in the 1860s for a French edition of Cervantes's Don Quixote, the first of which is below. 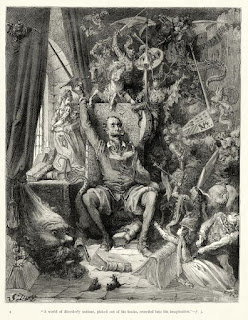 Now it appears that Gilliam's The Man Who Killed Don Quixote (2017) will finally be made and distributed next year, albeit with a very different cast than originally slated over a decade and a half before theatrical release.  The history of Cervantes material has been a part of my own history as long as I have been a gamer and I love when I can bring some of the same nuance and flavor to my tabletop gaming, particularly RPGs.  I urge others to delve into this work as well and I think it will bring depth and breadth to their own efforts. 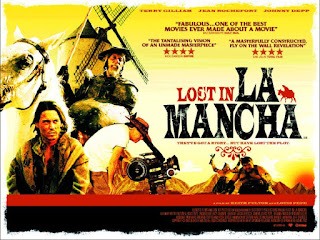