I'd heard of Rat Kings years ago and always thought they were some sort of hoax, and I guess they might be still.  Recently, I saw something that reminded that they seemingly exist or existed so I clicked around a little just to see if there was any new info out there.  There's an interesting article on MentalFloss.com from a couple years ago titled, "An (Almost) Comprehensive History of Rat Kings" and it seems to have about as much information as anywhere, so check it out here. 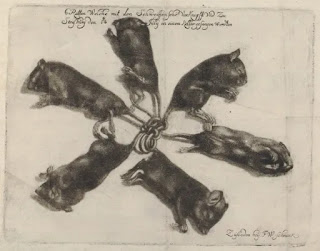 But I got to thinking that since this phenomenon came about on the tail end (pun intended) of the Late Middle Ages (1564), there's certainly fair reason to work them in to a D&D game.  However, it would hardly do to include a dead rat king in a game when a live rat king, or better a live Giant Rat King, would be so much more fun.  It (they?) would have to be surly, bitey, and very active.  I say this because it would have to be incredibly disconcerting for any rat to be tangled up by the tail and worse, to be tangled up with multiple other rats.  Add in being in a situation where the fight or flight instinct is kicking in, such as anytime any predator (humans and the like included) happens to be nearby and there's nowhere to hide.  When you are vulnerable like that, becoming aggressive is clearly the only option.  I suppose you'd have to still treat it as individual rats but perhaps randomly roll 3d2 for the number appearing as three is as few as you might want but more than six would be so unwieldy as to be little danger to anyone but themselves.  After that, roll HP for each Giant Rat and only allow up to three to attack any single opponent.  Also, for each one that dies, give a minus one to hit for any survivors.  While they might get used to the bouncing around of their live companions, each one that goes down creates dead weight throwing off the whole multi-creature organism.  Well, I know one thing going in my campaign soon.