The Tuesday Sundries - The Golden Girls and 2E AD&D?

I'm a big fan of the Old School artists like Dave Trampier and David Sutherland.  Neither is with us any longer but their influence on the hobby came early and was very strong, especially for me.  This piece of Tramp's is one that springs to mind whenever I think about an adventuring party.  This illustration appears in the 1E AD&D Monster Manual as a full-page facing opposite the Appendix Treasure Table.  So, this was one of the last images one saw when paging through the first AD&D book ever released.  It stuck with me. 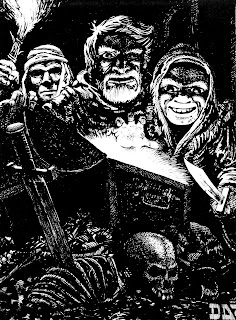 Naturally, when I recently became aware of a Mike Mearls tweet from October 2017 in which he seemingly jokes about the influence of The Golden Girls on the development of AD&D 2E, I had to chuckle.  There was no doubt in my mind he was joking so be careful not to jump to conclusions about the veracity of the following. 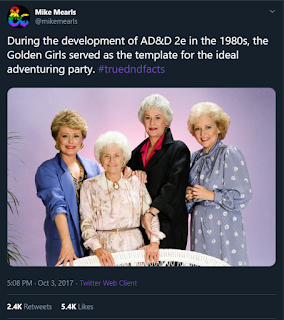 Obviously, the basic adventuring party pre-dates 2E by a good stretch with (O)D&D having three of the basic classes and adding the fourth in the first expansion supplement.  So, too, 1E AD&D had the four basic classes (then some "sub-classes") as the clear core of any adventuring party.  Of course, I prefer to think of them as my monsters' four basic food groups, but don't tell my players! Anyway, the convergence of these things prompted me to do a little mashup.  Enjoy! 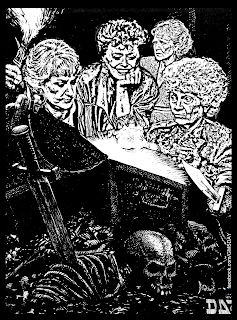