Over on Distractify.com, there is a wonderful pictorial on "33 Unbelievable Places (. . .)" that jumps off the screen with each and every photo.  Seriously, every photo was inspiring to add them to some adventure or setting (for a tabletop RPG or other gaming).  I'll expound here on a few (Nope, I'm not just cherry-picking the best ones!) but you need to check these out for yourself here!


So, the caption on Distractify.com reads as follows -


Around 50 to 60 million years ago, intense volcanic activity in the area formed a lava plateau. Over time, the lava cooled and fractures created columns that are so perfect, they almost look artificial.

My reaction on seeing the formation tends to run along these lines.  The idea that a super-species of giants could carve something like this, or sculpt the pieces and transport them to the location, has a certain appeal.  But maybe that is too easy.  So, the extra step in the process, so to speak, is the whys and wherefores of that colossal achievement.

The idea behind the name is that it acts as a bridge toward something, but what?  Perhaps there was something out there at one time that no longer exists.  Could it have been a fortress that has sank into the sea?  Maybe it was a place that no longer exists in this dimension?  How about something that only appears in this dimension from time to time?  I like the last one best so far.

Next up, Fingal's Cave, Scotland:


And the caption for this one on Distractify.com reads -


Like the Giant’s Causeway, this cave was formed by lava cooling and fracturing over millions of years. The jagged formations on the outside are entirely nature’s doing.

It's hard to look at this particular angle and not see a heart-shaped opening.  Perhaps that can be worked into the legend.  A map or instructions that guide someone to this place but specifically from the angle that forces that view or interpretation might be in order.  This is also one of those places where seeing more of the photos associated with it gives further inspiration.  You've got to check out a Google image search that includes interior photos here!

Finally, the Eye of Africa, Mauritania: 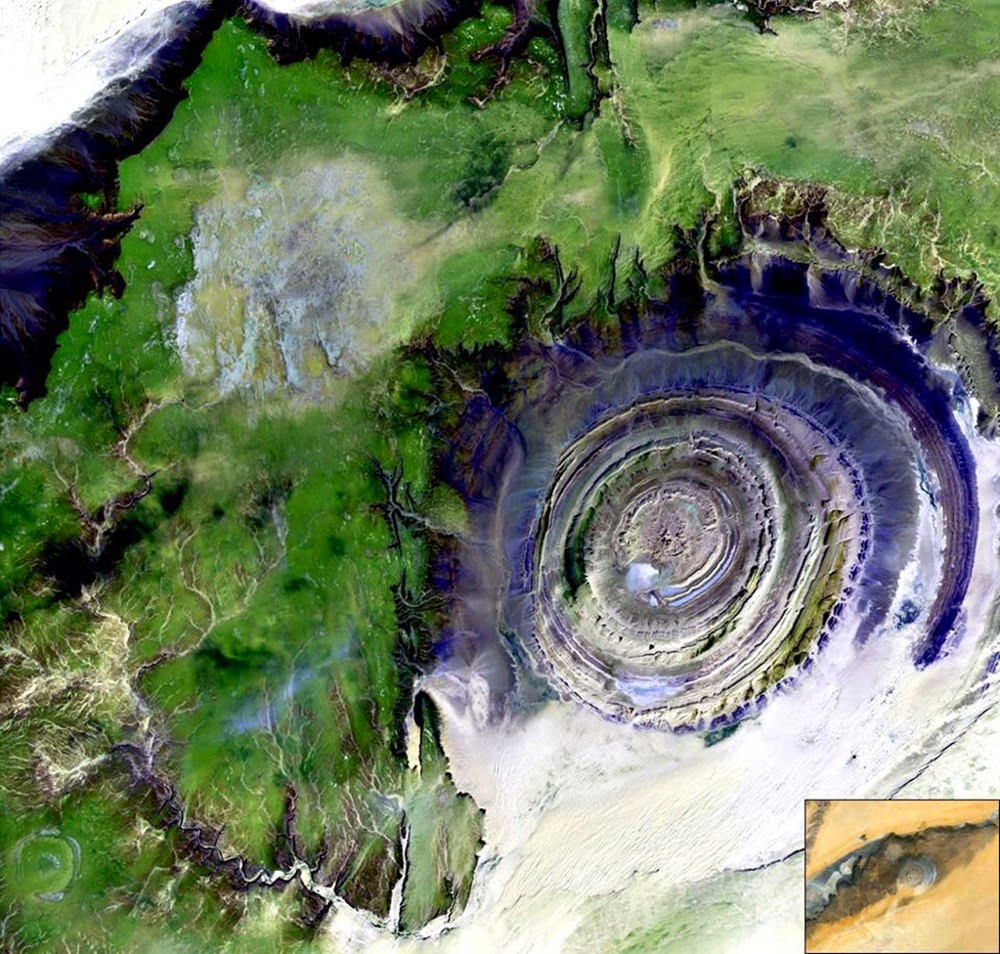 The Distractify.com caption for this reads -


Found in the middle of the Sahara Desert is a deeply eroded bowl, over 24 miles in diameter. The natural formation is so impressive that for a long time, scientists believed it was the site of an asteroid impact.

I think most GMs of tabletop RPGs see any crater as explainable by a downed alien spacecraft.  That's always fun.  Another way to go,though, is to attribute the concave feature to something pulling the ground down from below.  Maybe this crater gets deeper with each passing year all leading up to the coming of some gigantic creature or being that is revered in the local legends.

Anyway, lots of ways to go, as always, and the rest of the photos should bring more and more ideas with each viewing.  Again, they can be checked out more fully on Distractify.com here!