Over on the Mirror.co.UK website, there is a recent article titled "Dead weird: After the 'atomic wedgie' here are 21 of history's most bizarre deaths" that got me thinking about how to start tabletop RPG scenarios.  I think most of us have woven in the usual hooks: rescue the so-and-so, blah-blah-blah-treasure, yada-yada-tickle-tourney.  Just me on the last one?

Anyway, one of the fun ways I sometimes like to pique interest is to introduce a element so bizarre that the group feels compelled to investigate.  Take the article mentioned above and linked here.  Come on back after you glance it over.

So, let's say you've got an RPG in most genres where the players are fresh into town and looking for some place of their own desire, often a tavern or outfitters of some kind, when as they are being given directions the local informant corrects himself and redirects them by another route.  He apologizes and briefly explains that traffic is blocked over on such-and-such-a street because of the accident.  It's a throwaway, a sidebar, that you can almost mumble because it would be amazing if the players aren't already hooked.  If they press for me info or you feel the need to add a little more, then explaining that several were killed in the molasses flood after the tank explosion might be enough to draw them in.

Of course, now you have to come up with an adventure but certain using an explosion to cover up a murder is possible.  Or a rival business destroys the tank, their methods being the work of some new evil which has bought a controlling interest.  It could even just be collateral damage from something else being blown up, the mystery behind the mystery.  It's all good if it's all fun. 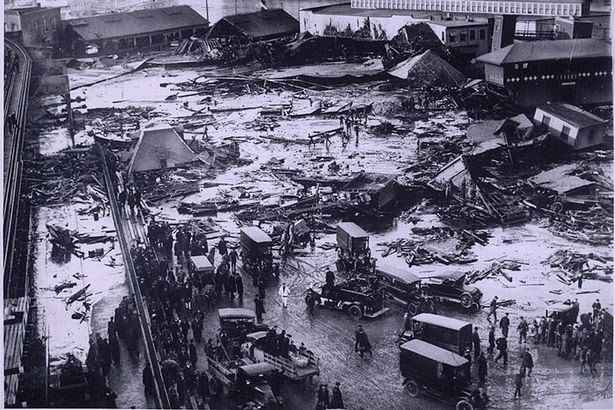