Historical Thursday - The Plague of Justinian

When most folks think about the plague, they usually think about the Black Death in the Middle Ages.  Nevertheless, the Plague of Justinian which hit in the Byzantine Empire, as well as around the Mediterranean and deeper into the Middle East, in the Mid-Sixth Century was just as brutal to the affected areas as what came many years later to Europe and elsewhere.  In fact, there were many plagues (and epidemics) over the course of history that wiped out millions of folks in the populations where they struck.  The Influenza epidemic of 1918 killed a number of people rivaling the death toll of the Black Death (though, obviously, not as great a percentage of the population). 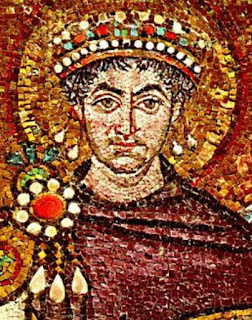 Justinian prosecuted a number of wars both east and west of the empire during his reign.  To the east, he had to first deal with the Sassanid Empire with which his uncle, the previous emperor, had been in conflict.  He bought them off to ensure "Eternal Peace."  What he did next was more interesting.  Despite ending a war with religious enemies, he started another right on its heels with a traditional enemy of the later Roman Empire of the west, the Vandals.  A few hundred years earlier, the Vandals had rocked the western Roman world.  Pliny the Elder, Strabo, Tacitus, and Ptolemy all mention the Vandals (or Lugii, which are believed to also be the Vandals) which were pushed into the empire, mostly likely by the Huns, where they dealt serious damage to the Franks and Romanized Gaul.  Over the course of several generations, the Vandals muscled their way across Late Ancient Europe and eventually into Northern Africa where they seemed to gain their most solid foothold, establishing a a Kingdom.  In addition to the devastation they caused moving through the Western Roman Empire, they continued to be a thorn in Rome's side until a peace was finally negotiated in which Rome had to cede the territory of Numidia to the Vandals.  They had even sacked the City of Rome in 455.  Furthermore, they held Sicily, Sardinia, and Corsica by the 470s.  This history, as with all Roman history, must have been known to all Byzantine emperors.  In 533, Justinian used the deposition of a friendly Vandal ruler that happened toward the end of his uncle's reign in 530 as impetus to invade North Africa.  Although the Byzantine Empire would only have loose control of that territory throughout the next few decades, simply invading the old Roman enemy was an impressive show of force for the new emperor. 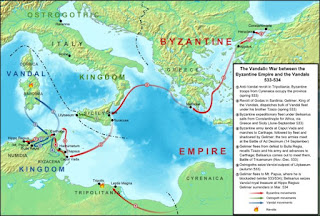 Still, the Plague of Justinian came at a most inopportune time for the Byzantine emperor.  The death of King Athalaric of Ostrogothic Italy and subsequent misdeeds of the usurper who followed in 534 gave Justinian the excuse to begin to retake the Western Roman Empire and attempt to restore the whole.  The first part of what would be called the Gothic War went fairly well for Justinian from 535 to 540.  Within the first year, Byzantine forces had sacked Naples and retaken the City of Rome.  Ostrogothic leadership changed hands at this stage and their army attempted to take Rome back for two years but were unsuccessful.  The war would continue to drag on for decades and there were many problems along the way but none more crippling than the Plague of Justinian which reduced potential army strength and resupply of forces as well as disrupting their peace in the east requiring Justinian to split focus again.  His time as emperor it still touted for many great achievements but one has to wonder if the Plague of Justinian scuttled a reunification of the whole Roman Empire and a very different future for Western Europe as a result. 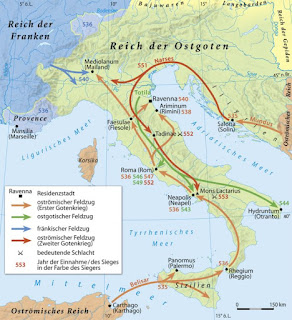