For my part, I am always torn between not wanting to reveal such secrets and wanting to wow my readers with something new and different.  Naturally, much of what I have felt over the years to be new and different has turned out eventually to have been quite similar to something someone else has independently created after a fashion.  That's not a big deal for a home campaign with players who don't get around much, certainly less so years ago before we all had access to the hivemind that is the Internet, but in our modern age it is difficult to come up with completely new ideas.  Thus, many games (and dungeons) tend to take some existing ideas and turn them on their head or simply use them as springboards for creation. 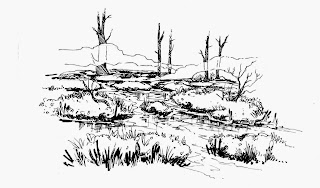 One such for me came fairly early in my gaming/GMing career, soon after the publication of the 1E AD&D DMG.  Although I had been playing and GMing since the advent (O)D&D, when we switched to the Advanced edition I definitely was spurred on to expand what little campaign material I had.  One of the other GMs in our group had already warned us off the sample dungeon in the book and once we were through it, what little there was, we were all allowed to read the spoilers therein.  For my own part, I decided to use the setup for the dungeon, a ruined monastery with a below-ground complex.  I included the little-used road leading away from the small village and had a narrow causeway into a fen lead to a small isle (a sort of low mound) on which there were ruins (not just an abandoned monastery from the book).  I also included rumors in the village of a large red gem fabled to have been in the possessions of the monks long ago.  While I didn't have a thief in the village, I did have a group of bandits using the ruins as their headquarters though they had no knowledge of the dungeon underneath. 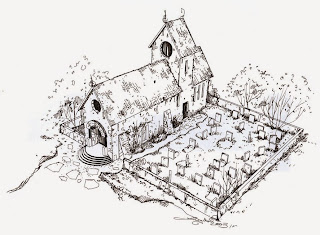 Part of what makes something unusual isn't always because it is unique or created from scratch.  Sometimes things can feel unusual to players because they sense something is familiar but find their expectations are met in a new way.  In this case, the dungeon below was laid out in a way to suggest the religion of the all-but-forgotten monks.  That in turn is a clue as to where the treasure is likely to be stored which is not the obvious place that many temples would utilize.  Further, setting off one particular trap also reveals an entrance to some caverns that are an extension of a vast network that sprawls across the continent, my own underworld of Tartarus.  This layering of the familiar with the unexpected twists allows for GMs to avoid tired cliches without stagnating on tired themes.