This single room could accommodate multiple detainees with a dozen sets of manacles fashioned into the wall.  Certainly, the less dangerous of their ilk could have simply been held without using the chains.  The iron-barred door is still serviceable and locked.  Unlike the North Holding Cell (Y8), there are remains in the room in the form of several piles of bones under spots where there are wall manacles.  One of the manacles still holds the bones of the hand, wrist, and forearm of some unlucky humanoid detainee.  Some details might be added later. 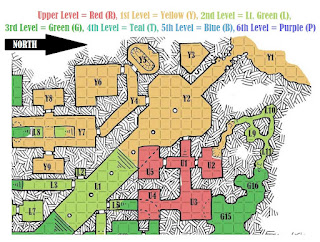