Sean McCoy, the mind behind the Mothership RPG, had an idea toward the end of last year about a year-long project where someone would commit to writing up a dungeon room once per day, thereby having a decent-sized (mega?) dungeon come the end of the year.  While I know there will be days when I cannot commit to any amount of time, I might be able to tackle this in spurts and wind up with the same level of content, on average, so I thought I might give it a go.  Even this post is being penned on Wednesday to be posted as if on January First, so don't expect a lot of these posts to be as timely as someone following the project guidelines more strictly then I will.  Sometimes I will backdate posts to fill in days missed and sometimes I will write multiple posts and schedule them to drop in sequence.  Likely any posts dropping over the days I work or, perhaps, during Gary Con, will have been written in advance and scheduled.  The posts I make for #DUNGEON23 will be posted here on the Grymvald.com corner of the CMG Blog Triad, since it is ultimately used as setting material.

All that said, perhaps I can speak to the process I intend to use, though certainly this will not be a limitation and will change and be adjusted as needs be.  For starters, there's a Dyson Logos map which he titled Deep Halls that falls under a commercial license, so it is totally open for me (or anyone, really) to use.  It's a mega-dungeon, of sorts, with many levels, though interwoven in its design so as to all be on one page.  There is a version of the map included which color codes the levels, making the map and use of it for a project like this, much more manageable.  I'll use this as a starting point and see where it leads me.  It surely will have handled much of the heavy lifting, as far as the mapping is concerned, though I may make some changes to it as my own creativity may dictate. 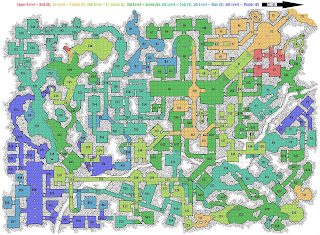 As tempting as it might be to jump around the map and cherry pick some of the bigger or more stylish set piece rooms, I do think it would behoove me to start at what appears to be the main entryway on the yellow level in the upper right of the map.  I don't want to pigeonhole or corner myself by over-planning what sections of the maps will be, thematically, right out of the gate and wind up not having the chance to allow inspiration to take over and guide me.  The map will likely steer some of my creativity just by its design.  I'll repost this map or portions of it from time to time in my posts so that it is easy for those reading along to keep everything sorted.  I'll take some time to number this map at some point, as well.  I know some folks are making a map as they go along but I've always wanted to do something with this particular map, so this works for me.  I may need to add some offshoot maps if I run out of room to fill but there are a lot of them here and some of the cavern areas might be multiple "rooms" as far as that goes, but we'll see.

Lastly, for this opening post, I want to say that making use of many books and generators of all kinds will be a possibility.  I like some randomness in my designs and I'm going to avail myself of all sorts of tools in that vein.  I will try to make mention of where I took inspiration and should I ever put this all together in some form of PDF, I will certainly add all parties into a "Thank You" section and / or in a Section 15 of an OGL as appropriate.  So, that should get things rolling.  We'll see where this goes as the days grind on.  I think it will be fun to do and I hope just as enjoyable to follow along!